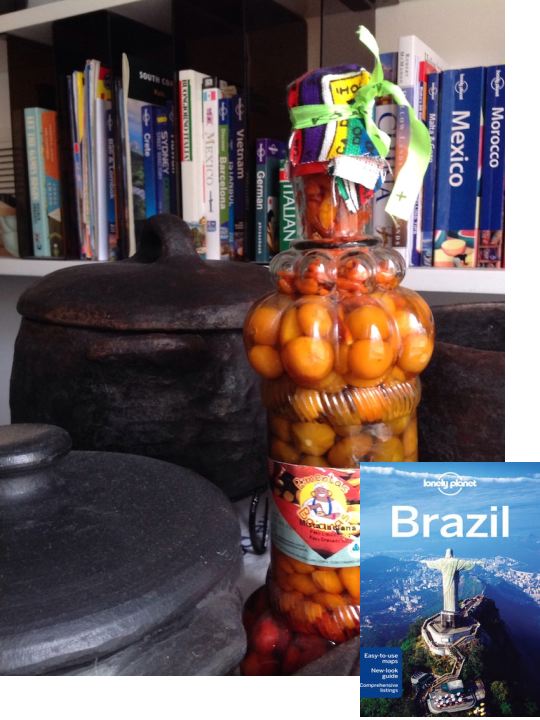 Most every country around the world has its own version of a hearty traditional meat and bean stew, and often as not, a traditional clay pot associated with cooking it. These stews are dishes that reflect geographical location, they are redolent with historical and cultural significance and often highlight a fierce competitive sense of ownership, sometimes from within that country’s own states and regions.

Take France’s cassoulet for example. In Southern France, the three towns of Carcassonne, Toulouse and Castelnaudary are all famous for their cassoulet. Each has a slightly different variation and each claims their’s is the real thing – but each have a couple of things in common. The first is that they are cooked in an earthenware pot that the dish itself is named after, the cassole, and secondly, each version, despite the difference in meats used in each town, all include beans.

(Check out The Classic Cassoulet: La Poterie Not).

So it is with one of Brazil’s best known dishes – the feijoada  (feijoada brasileira) which takes its name from feijão, meaning beans in Portuguese. Black beans in this instance, which gives this hearty meat dish its fabulous deep blue/black purple colour. And whilst this dish is named after the beans in the recipe, rather than the pot in which it is cooked, nevertheless it is a dish that is associated with cooking directly on an open fire, albeit in an iron pot. Like the pots that cooked our lunch of feijoada on a traditional farm cooking stove at the Estância Mimosa that the family visited in Bonito, in southern Brazil’s Mato Grosso do Sul state. 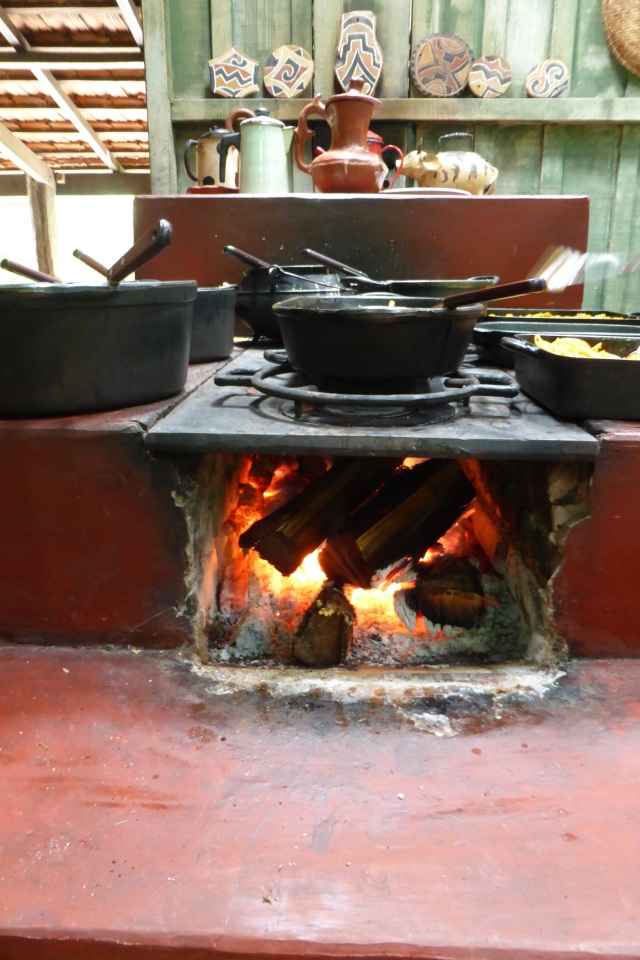 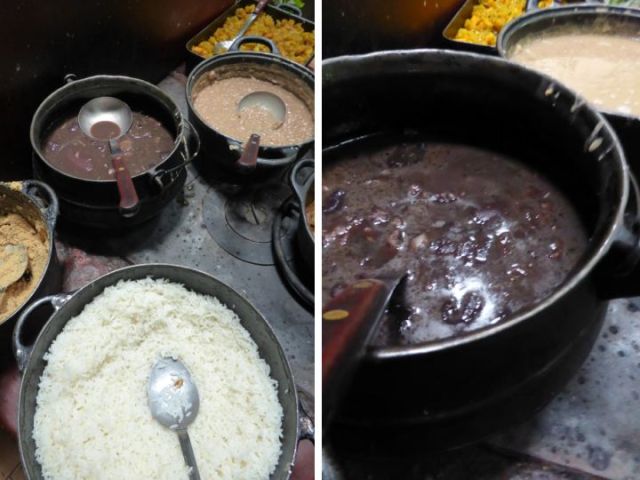 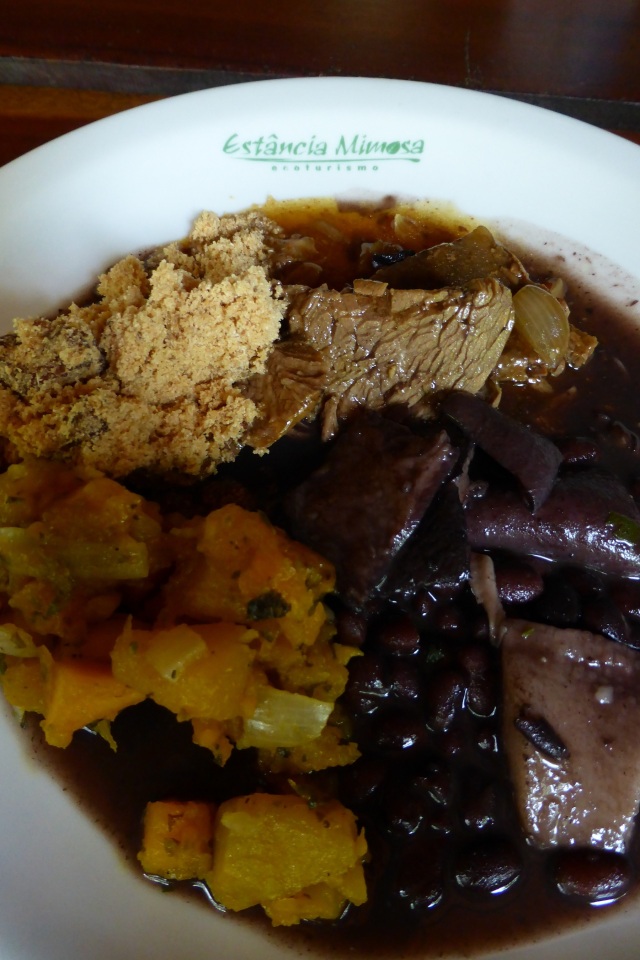 Legend has it that the origins of this famous national dish stem from the country’s slave history. As one of the last countries in the Western world to abolish slavery, Brazil had, by 1888, imported about four million slaves from Africa to work on sugar cane plantations, coffee fields, mines and family homes before slavery was finally abolished. Hardly surprising that nowadays, the mix of Indian indigenous groups, melded with the Portuguese colonists and further enhanced by the African slaves, all contribute to the rich melting pot that makes up the population of Brazil.

When Brunyfire and her Brazilian family traveled from Rio to Salvador city in Bahia during the New Year of 2016, the pride of the African slave was apparent in the people everywhere, but never more so than in the beautiful Bainas that paraded the streets in all their finery. 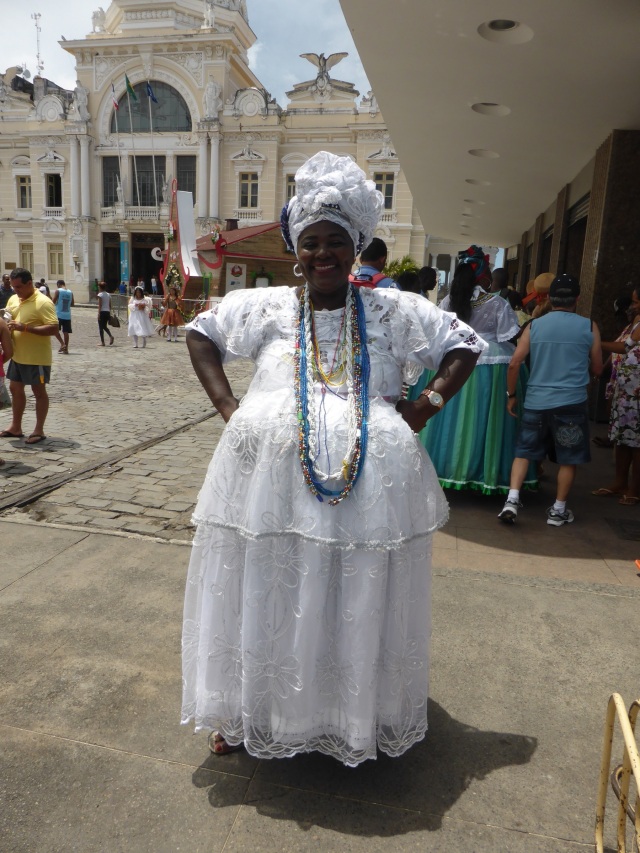 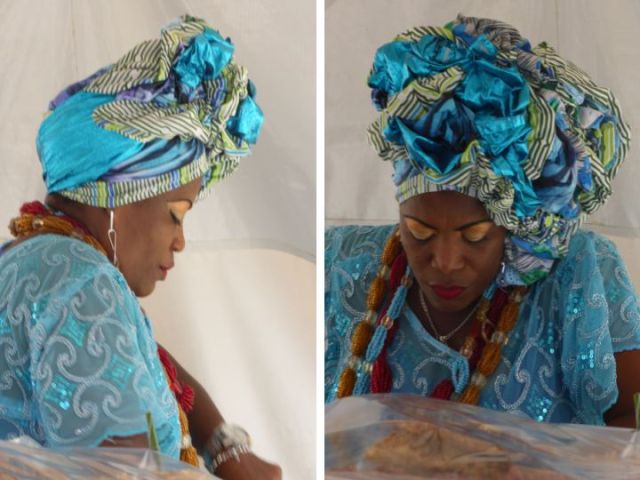 (Check out the article Bainas of the acarajé: a story of resistance by Carolina Cantarino, an anthropologist and researcher with the Laboratory for Advanced Studies in Journalism, State University of Campinas. For more information about the growing political clout of the Bainas, check Vanessa Iniguez Castañeda’s article: Traditional as political: the Bainas de acarajé).

The origins of Brazil’s feijoada is said to stem from the slave tradition of making the best from very little. With the feijão, or beans being the mainstay of the slave diet, the dish entered Brazil’s gastronomic history as a result of the meat that was later added. These were purportedly the more unusable cuts of meat that were given to the slaves from the kitchens of their owners. Such as pigs feet, ears, tail, belly, tongues; those cuts deemed unfit for the more delicate stomachs of the master and his family.

However, according to Brazilian culinary historians Carlos Augusto Ditadi (National Archives in Rio de Janeiro), and Luís da Câmara Cascudo (author of História da Alimentação no Brasil – The History of Food in Brazil), the origins of feijoada are not even Brazilian. Feijoada, they argue, goes back to the pork and bean stews of Southern Europe, and those of Portugal in particular. What these European dishes and feijoada have in common is that they are all ways of cooking the less noble cuts of pork in a thick bean stew, and closer study indicates that it is particularly related to the stews of the Portuguese regions of Extremadura, Trás-os-Montes and Alto Douro. The major change that resulted in the ‘Brazilianization’ of feijoada was the use of black beans, instead of the European preference for kidney beans, white beans, or chickpeas.

There are two different ways of preparing feijaoda depending on the region of Brazil. The Carioca natives from Rio de Janerio, use black beans, onion, and garlic when preparing feijoada, whilst in São Paulo it is prepared with brown beans.

However, what makes this dish a truly Brazilian feijoada completa, is the way it is served and the accompaniments served with it. 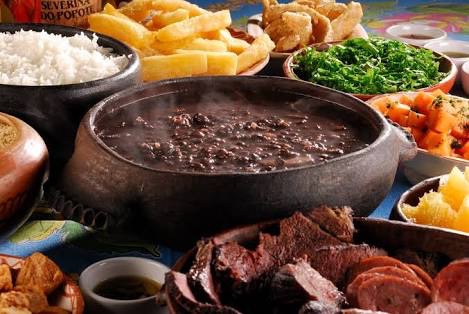 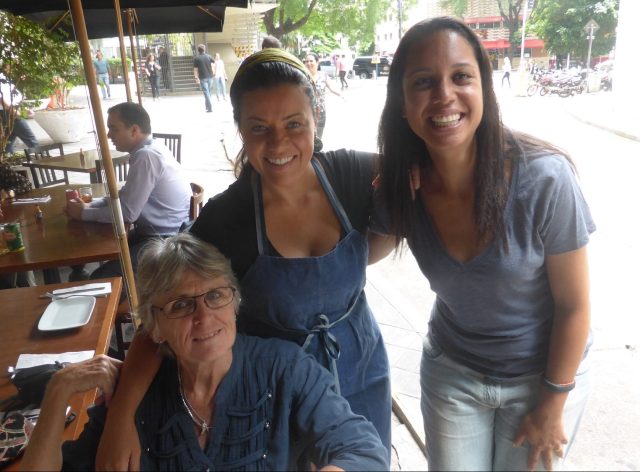 ……runs her quirky restaurant from the base of the landmark Copan building in the architecturally diverse Centro neighbourhood of São Paulo. Here, she produces a hearty feijoada amongst her repertoire of rustic Brazilian cuisine. A self taught cook, Rueda’s signatory dishes are all based on traditional cooking (she refers to herself as a cook not a chef), and her feijoada clearly illustrates the importance of how this dish should be presented. Traditionally, once the meat is cooked, it is removed from the stew, carved, and served separately to the beans. Served alongside the plate of carved meat and the beans is always a dish of shredded and fried collared greens, portions of orange, a lemon vinaigrette, rice and/or manioc chips and farofa.

It is the farofa, made from Farinha de Mandioca – a coarsely textured toasted cassava/manioc flour – that makes this dish uniquely Brazilian.  Produced from the cassava tuber (also known as manioc and yucca), a plant native to South America, the story behind the making and the by products of this indigenous plant merits a whole story later! 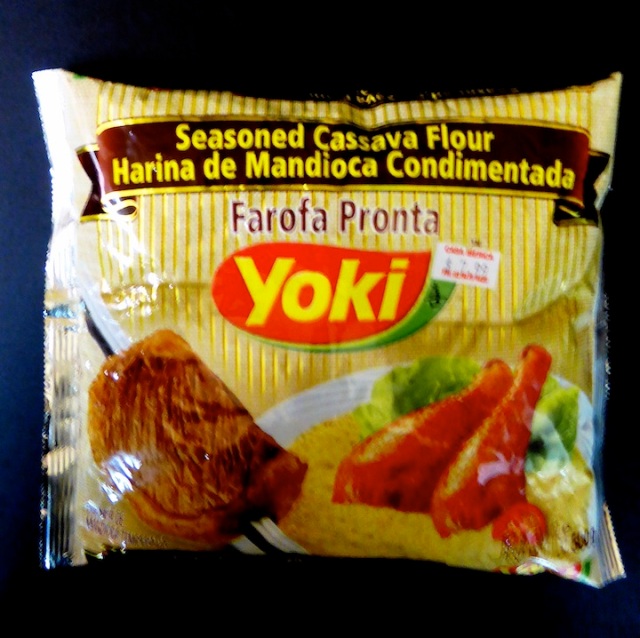 Meanwhile, another restaurant of high repute – Mani – nestles in the Jardim Paulistano, one of São Paulo’s most sophisticated suburbs. Mani’s chefs, Helena Rizzo and Daniel Redondo, aim to combine the contemporary with the traditional.

Whilst Rueda’s Bar da Dona Onça constructs an original feijoada in a contemporary setting, Helena Rizzo of Mani, (the restaurant is named after the native Indian goddess of manioc), deconstructs the feijoada.

In Rizzo’s version, concentrated balls of feijoada are made by boiling the beans with the meat as per the traditional method, but then she sieves this combination until it becomes a very smooth purée which are then dropped as tiny spoonfuls into a solution to produce ‘jellified’ droplets – a process called spherification. ** 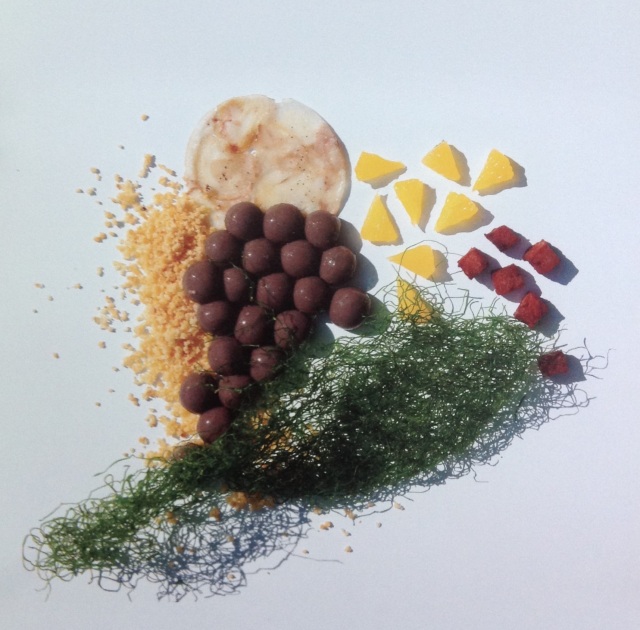 Regular feijoada is served with slightly bitter local greens that are thinly shredded and boiled, plus toasted manioc flour (farofa). In Rizzo’s version, she deep-fries the shredded kale greens until crisp and arranges her Brazil nut farofa in a thin line on the side of the plate in addition to small wedges of orange, little cubes of fried pork and a smudge of vinaigrette. 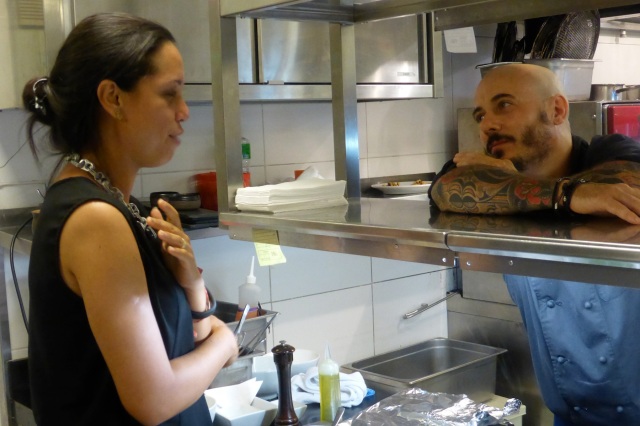 One of the many lasting images of Brazil will always be the generosity of its people – from the favelas to the fancy restaurants. As a gringa, Brunyfire was always met with warmth and respect –

we were traveling with the Carioca Queen after all………

**Spherification is the culinary process of shaping a liquid into spheres by using sodium alginate and either calcium chlorate or calcium glucate lactate, which visually and texturally resemble roe. The technique was originally discovered by Unilever in the 1950s (Potter 2010, p. 305) and brought to the modernist cuisine by the creative team at elBulli under the direction of executive chef Ferran Adrià. (wikipedia.org/wiki/Spherification)