……..has become a centre of culinary experimentation – a kind of laboratory for re-creating the flavours of those countries our family has traveled through or lived in over the past few decades.  These experiments are dedicated to family: to cultural memory through food and the celebration of open hearth cooking, particularly in collaboration with clay through the use of traditional clay usage and clay pot cooking methods. 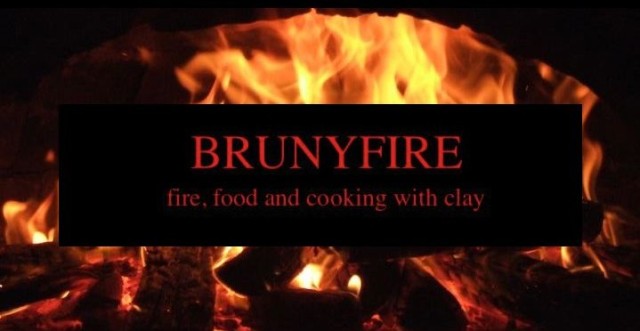 …….was created a couple of years ago and is dedicated to:

“living in an island paradise and exploring fire in relation to cooking with clay.  A journey that experiments with living the good life through fire, food and cooking.  An international open-hearth gastronomic trip through clay-pots, family stories and shared experiences”.

This blog was created from the perspective of using Brunyfire’s (ever expanding) collection of clay cooking pots that has now grown to such an extent that a further building has been created to house them – The Boathouse.

However, because many of the stories outlined in the previous journal stray from the main theme of cooking with clay, and whilst they will continue to be told, Cooking with Clay will concentrate solely on the subject matter of its title.

‘The Observatory’ and ‘The Boathouse’ and much of the exterior layout of our Bruny property reflects the cooking practices that are currently being explored in conjunction with as much of the local Bruny produce as possible. Currently, these include the wood oven, the hangi style firepit and the Japanese inspired irori.  Heating coals on the firepit are then used to fire up the hibachi, the hida konro, a Thai Knom Krok brazier and clay stoves from Indonesia, Sri Lanka, Tunisa and Ethiopia – just to name a few!

As a potter whose passion for the medium of clay has been sustained through continued practice for more years than I care to remember, the parallel activities of potting and cooking have long been apparent. Both these practices have much in common – preparing clay to make pots and preparing food to cook are both reliant upon the sourcing of the right ingredients to combine into a homogenous body that will be rendered into something tangible through the magic of fire.

Whether it is by following a recipe for preparing a meal or for making a glaze for a pot, it is the combination of ingredients, and their reaction with each other through the application of heat and time that metamorphoses each into something far removed from its original state.

Kneading bread and wedging clay for example, both share the same handling technique in order to result in each becoming a homogenous mass, but the desired end result of each is quite different.

On the one hand, wedging clay is necessary to get rid of air bubbles that will otherwise cause ugly bloats in the pot’s walls during firing, whereas the kneading of bread is intended to encourage the development of air pockets (from the CO2 gas created by the leavening agent) to create the desired cooked texture and taste.

Both firing pots and cooking food rely upon the alchemical changes wrought by heat and time to change their respective molecular structures from the raw to the cooked – in the case of pottery, from the malleable to the permanent and in food, from the poisonous, or inedible, to the edible.

Cooking and potting also reflect a strong sense of ‘place’ – the materials of clay, temper, and fuel and the food produce that are sourced from the place of origin reflect a true sense of regional identity.

Locally sourced produce in conjunction with handmade pots made from local materials (such as the slip cast porcelain jelly moulds come pie dishes – above: and the pate/jelly pots: below – red clay sourced from Great Bay) produces a cycle of awareness that re-connects us to nature and the environment through the understanding of the seasons. Seasons not only effect when food is harvested, it also determines the conditions under which the potting materials can be collected or fired.

Many of the cooking pots in Brunyfire’s collection are low fired earthenware or terracotta. Terracotta is Italian for ‘baked earth’ and these pots do indeed impart an earthiness of flavour during the cooking process, leaving behind a patina that increases through continued use. Paula Wolfert, in her book Mediterranean Clay Pot Cooking refers to the ‘patina’ or memory of taste in a clay pot that has been used numerous times.

That clay pots have ‘memory’ is reflected in both the making process as well as in their use as a cooking utensil. For instance, forming faults that are corrected in the making process of a pot, particularly in the case of a thrown form, often reappear during firing. Similarly, a specific meal that has been cooked repeatedly in the same clay vessel will leave a permanent imprint of its taste behind in the pot that over time, adding depth of flavour to ensuing meals.

Different cultures have developed specialized clay pots for cooking, preparing and storing food that require the specific qualities of earthenware – the qualities of porosity primarily that allow for cooking over hot coals or for keeping water or food cool.  An earthenware clay body is one that can ‘breathe’.  Local produce and materials can thus reflect the region, creating a distinct culinary identity reflective of geographic location.

Distinctive earthenware cooking pots have evolved around the world through local necessity, and in many countries, the design of the pots and the food cooked within them are easily identified as iconic emblems for that country.

My fascination with open hearth cooking practices has been inspired by those nationalities who still make clay pots and cook on an open fire. These ceramic practices have been passed down over the generations, often from mother to daughter.

It is the tradition of collecting, preparing, making, firing and cooking using local materials and produce by both potter and cook – those actions born from intuition, finely honed by experience and passed on by necessity – is what I am most excited about.