The beaches of Waiben (Thursday Island) glitter with the menace of broken glass wedged amongst the rocks and embedded in the sand, so much so that the locals refer to this hazardous waste as ‘TI coral’.

Over time, the relentless tides wash the bottle greens, blues and browns; pock marking their surfaces and rendering them sand blast smooth……..

……..and transforming them into collectable treasures for aspiring beachcombers.

And in amongst the glass, and the rubber thongs, the plastic bottles and bits of (real) coral – the occasional fragment of cobalt decorated porcelain rises to the sandy surface………

……and it is these little beauties (patiently collected over time by Mr TN) that, for Brunyfire, touch upon a particularly interesting part of the Torres’s rich history. According to Mr TN, these pottery sherds are most likely the remains of the rice bowls used by the Japanese pearlers whose luggers frequented Waiben waters during the 1870s.

(Above image from The Legendary Pearling Lugger by David Jones)

During a previous sojourn to TI, an enticing tip from Kazu Takami (the only remaining pearl farmer left in the Straits) who still lives and works on Gealug (Friday Island)……. 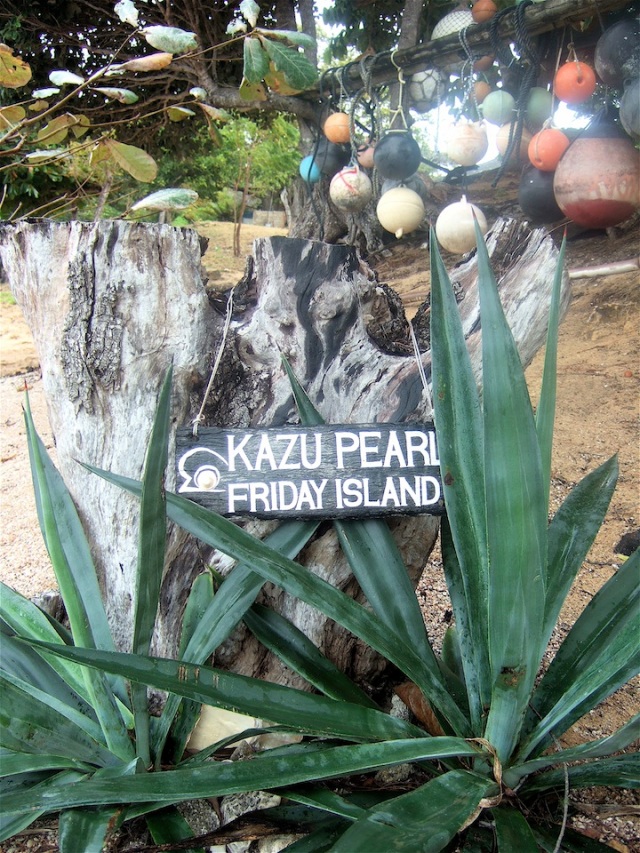 …….put Brunyfire onto a possible TI clay source. Having just returned from the volcanic shores of Erub, where, despite there being no natural clay or timber resources (everything is imported), the artists at the Erub Arts Centre are producing wood-fired ceramics, I was keen to search for a more local source of potter’s ‘gold’.

Waiben and in fact the whole of Australia, does not have an indigenous clay pot making tradition – but – having said that, there is more recent evidence to suggest that this is not so in the Torres Strait.

A research report by Duncan Wright and William Dickinson * discusses the discovery of ancient locally made pottery sherds at a new site on the Western Torres Strait island of Mabuyag (formerly known as Jervis Island). The study used petrographic results to reassess the antiquity of the pottery in the region to prove that the temper used in the Mabuyag samples actually came from the island. The Torres also has a strong trading culture that would have included the importation of the thin walled clay cooking pots from nearby Papua New Guinea.

A few years back, Kazu inadvertently exposed a strip of clay at Bach’s beach on TI whilst launching his boat. Armed with trowel and bucket and under the askance glances of bewildered locals, Brunyfire indeed struck gold – a rich vein of beautifully plastic, grey sticky clay just beneath the sand’s surface.

Straight from the bucket, the clay, sand and all, was pounded out by hand on the concrete of Mr TN’s (Aaron Smith – editor Torres News) door step into a large slab for a fish baked in clay dinner.

Dressing the barramundi in these foraged findings, the fish was then wrapped in the banana leaf, encased in Bach beach clay and shoved in the oven – of the domestic indoor type. 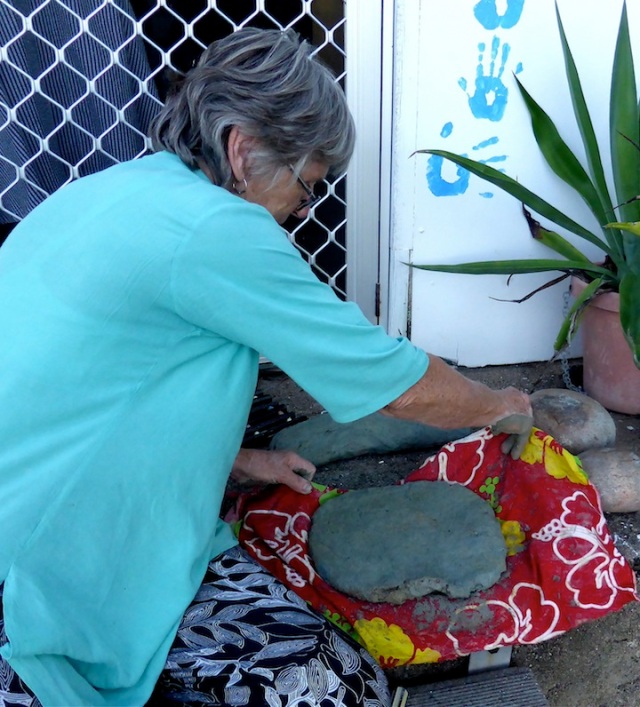 The foraged cumquats would have made a great relish – however, it was served with steamed rice and a couple of lime wedges………